Taking our skills honed from Music Festivals into one-off shows and tours is one of our favourite type of projects at LIBRARY PRODUCTIONS. Smaller than the usual festival format, these shows always come with their unique set of challenges and experiences.

Seeing the production from the other side, as an incoming production into a venue, has been extremely valuable part of our journey and helped us grow and as a company and progress with all levels of production delivery.

Over the years we have been privileged to have worked with some of the worlds greatest acts on some incredible one off shows and tours around the globe. We have worked in numerous roles and across several genres of music, at shows of varying sizes and scope, giving us a key insight into all facets of production at many different levels. 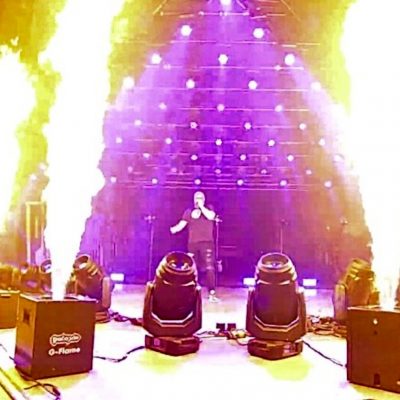 LIBRARY PRODUCTIONS were asked to take on the role of Production Manager and provide Stage Management for this inspired live stream album launch for YouTube.

We worked closely with the design team and the venue to bring this creation to life in very challenging circumstance during one of the 2020 Covid lockdowns.

We worked within all government guidelines to produce a safe and successful live stream.

LIBRARY PRODUCTIONS were asked to take on the role of Production Manager for this ambitious one day show at London’s O2 Arena.

Guest performers at the show included Stormzy and Mo Stack. 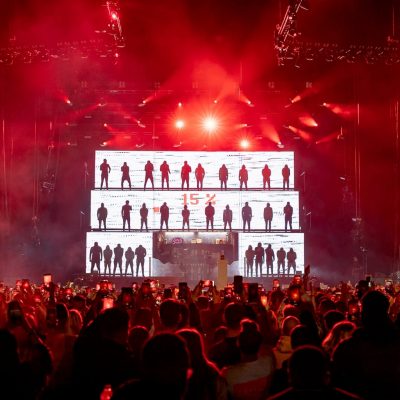 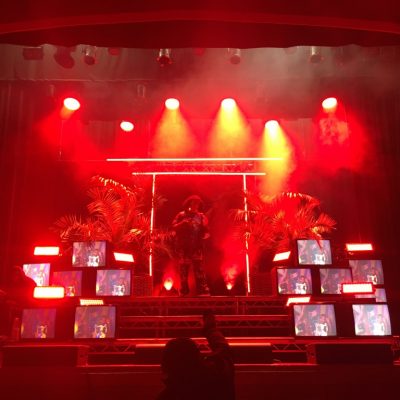 LIBRARY PRODUCTIONS were asked to take on the role of Production Manager for this one-day show for the performer Santi at Islington’s Assembly.

This role involved working from the creative brief to bring the show to life within budget. This included engaging suppliers for specific stage equipment, with a really short turn around time, producing the production schedule, running the load in, load out and show, as well as sourcing and booking a rehearsal space for the show.

A one-day show, LIBRARY PRODUCTIONS were asked to take on the role of both Guest / Assistant Stage Manager and West Hall Production Manager.

This role involved ensuring all the guest performers were at the stage on time, fitting their IEM’s and ensuring they had the correct mics.

In the role of West Hall Production Manger; this involved being the point-person for all satellite show elements located in the West Hall and other parts of the building. Satellite areas included the guest after-party, Merchandise and any sponsor activations. 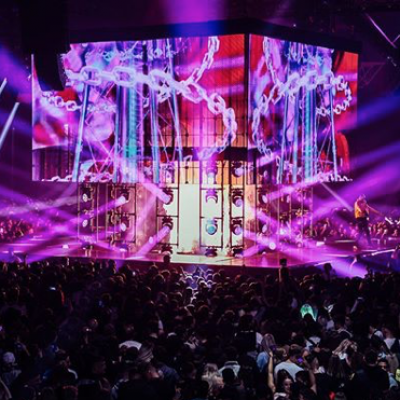 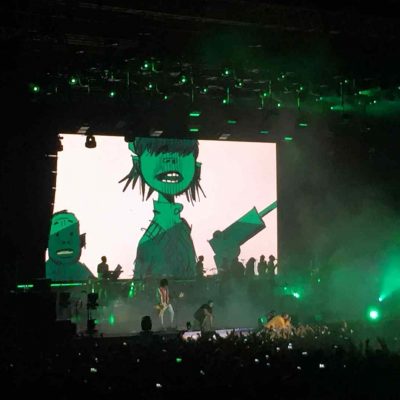 In 2018 LIBRARY PRODUCTIONS joined the Gorillaz European Tour as the Advance Stage Manager; being responsible for the load in of this multi-truck show at various venues around Europe.

This followed on from the one-off show in Dubai we were asked to Stage Manage the bands headline performance at a multi act festival-format outdoor show.

One of the largest shows for the band Bastille, with an additional string and horn section for this one-off show at the Royal Albert Hall; LIBRARY PRODUCTIONS were asked to cover the show from a stage management perspective for both the off site rehearsal day and the live show.

This role involved overseeing the load in and load out and ensuring all performers, guests and additional orchestral musicians were on and off stage on time and working with the full-time crew to ensure their needs were met in this venue setting. 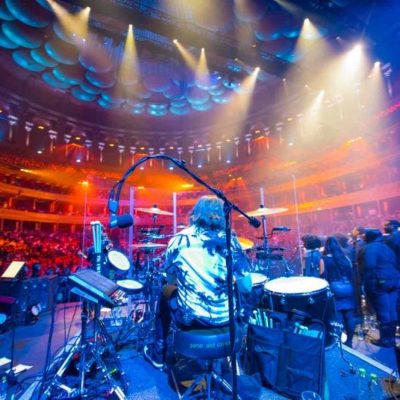 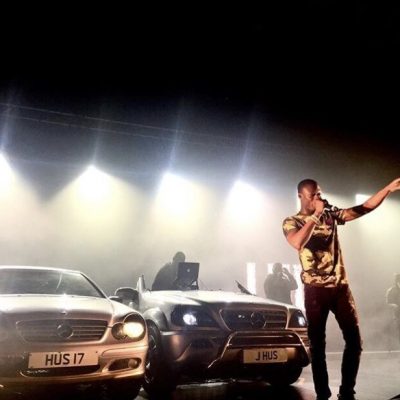 One of our favourite projects to work across; LIBRARY PRODUCTIONS was really proud to hold the role as Production Director for the critically acclaimed J Hus UK tour.

As part of this role the full technical rider was written from scratch for all elements of this bespoke show, we ran the full production rehearsals, including venue consultation, advanced the show for all venues and went on the road for the larger UK shows only. For the shows LIBRARY PRODUCTIONS was on site for, the role included running the stage from the load in, through to the live show where we were responsible for cueing live automations and getting all guest performers on and off stage, then through to covering production load out.

Guest performers at this show included Dave and Krept and Konan.

LIBRARY PRODUCTIONS were asked to Production Manage the show, which involved overseeing the technical planning which included all scheduling and crewing requirements and overseeing load in and load out for rehearsal and show day.

Guest performers at this show included Giggs and Drake. 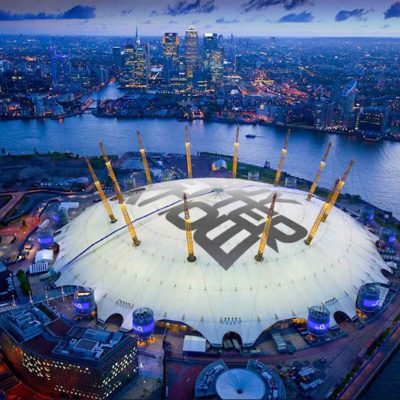 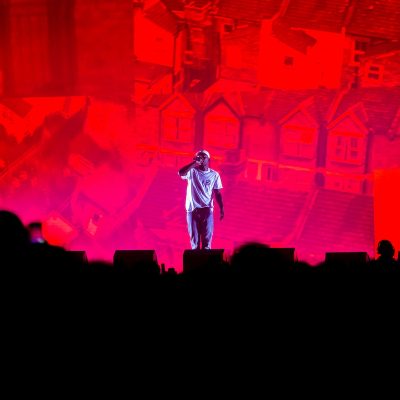 Streamed live for Apple TV, this homecoming show for Skepta was the artists largest show to date and was a very ambitious production.

LIBRARY PRODUCTIONS took on the role of Production and Stage Manager for this one-off show. In this role we were responsible for all tech elements of the show and managed the production load in, rehearsals, live show and load out. Running the live show included show-calling the complex design elements, such as stage automation, pyrotechnics and multiple guest performers.

After Metallica headlined Glastonbury in 2014, LIBRARY PRODUCTIONS were asked to join their Production team for two legs of the Metallica world tour spanning 2015 and 2016.

These tours included a run cross Northern Europe and Russia; and a central and South America run, including Guatemala, Ecuador and Columbia, as well as two back to back headline shows at the Reading and Leeds Festivals.

At the end of the second leg of the tour in 2016 we were asked joined the London promotional run, where we provided the artist runner team on top of the production support. 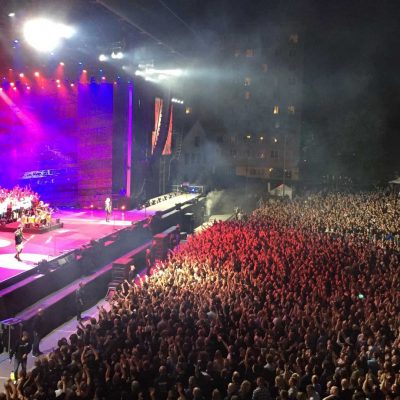 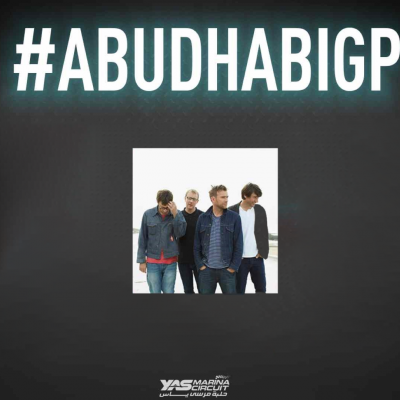 A one-off Headline show for Blur at the Formula One in Abu Dhabi, LIBRARY PRODUCTIONS were asked to take on the role as Production Assistant for the short leg. Involving overseeing the requirements of the production crew as needed.

A multi-stop UK and Europe tour of venues and festivals, LIBRARY PRODUCTIONS were asked to act as Tour and Wardrobe Assistant for this leg of the tour. Responsibilities included backing up both the Tour and Production Manager and overseeing all the requirements for the Dance troupe and their extensive performance wardrobe. 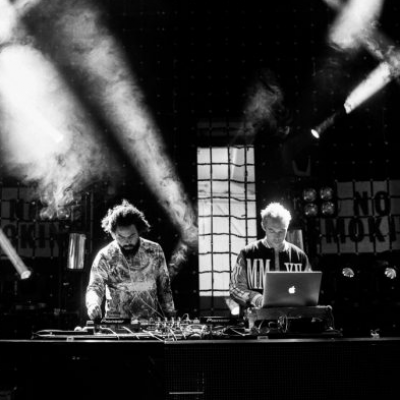 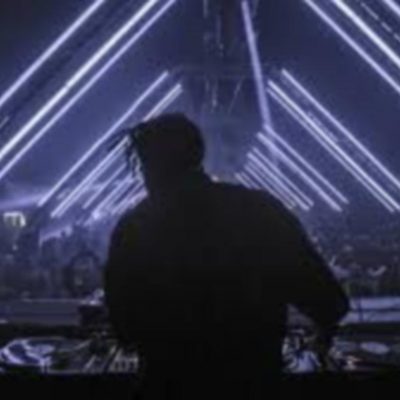 We were asked to work across 3 shows for DJ Seth Troxler’s super-group projects; Visionquest and Hot Natured. On all three shows we works across with the two projects, we took on the role of both onsite Production and Stage Manager.

The set up for the Timewarp Festival in Germany was particularly challenging, using Versa tubes throughout the entire arena space.